~~ I’m having a hard time as I write this. I may still be grumpy when you read this, or I may have gotten over myself by them, but you won’t actually know. For right now, buckle up, because the gripes are coming at you full speed.

~~ Regular readers know I reside in an angst-filled land called Dementia-ville. An almost-90-year-old patient with no grasp of reality, a superb profanity vocabulary, and a set of lungs that most SCUBA divers would envy populates this land. Her co-host in this alternate-reality show is one of a cast of aides with unnatural attachments to their phones and unlimited fondness for malodorous meals.

~~The patient has very long gray hair that does what hair does — it falls out, it flies about, and then it clings to hospitable surfaces. Just before sitting down to compose this blog, I opened the door to the clothes dryer to remove some laundry. Hair billowed forth onto my recently showered hair and across my bust. With a plthth sound, I blew some off my glossed lips, turned my hair over to tousle it, and brought each article from the dryer to the back door to shake it out. Vigorously and venomously.

~~ Once the laundry flapping concluded, I sat down to share some stories. However, it’s fairly difficult to concentrate when the patient has been transported from her residential area to an outside location close to the open window near my desk. You think I’m whining? You come here and try to compose a coherent sentence while Aqualung is bellowing Shit You Shit You Ugly Ugly Ugly Shit You You You You in a rhythm that sort of reminds me of George M. Cohan’s Over There. (She doesn’t quite have it, though, and I’m certainly not going to chime in.)

~~ OK, I’m employing my knowledge of breathing techniques and calming mantras to move me from this area of stress into a positive, relaxed mood.

Ten Minutes Later
~~ I think I have this. I might not have it for long, so let me relate what I overheard this week. There was a conversation between two women that made them both laugh uproariously, with the only snippet I could clearly hear: “And then she tried to blame the entire mess on the ex-husband!” Then there was the answer to the polite but interested inquiry, “How’s it going?” Of all the answers one might expect, I didn’t contemplate “My allergies are in high gear and so are my hemorrhoids.” Do you think my “Oh, I’m sorry to hear that” was the appropriate response? I hope so, because I chose that reply over, “Jesus, just say ‘I’ve had better days’ and leave it at that!”

~~ I love Twitter for many reasons, but here’s one:

~~ My son is a soccer fanatic and I’ve learned quite a bit from him. I also listen to BBC America each night as I get ready for bed, and they share lots of “football” news at about the time I’m removing my contacts. So in all these years of listening, watching, and discussing, I thought I had a knowledge of the sport that was semi-adequate. Just don’t test me on all the team names in the Europa League, because I thought Arsène Wenger was a team until I saw his photo this week. It’s one guy, not a team! C’mon, Borussia Dortmund is a team and so is Shakhtar Donetsk, so how plausible is it for me to mistake  Arsène Wenger for the name of a whole football club? 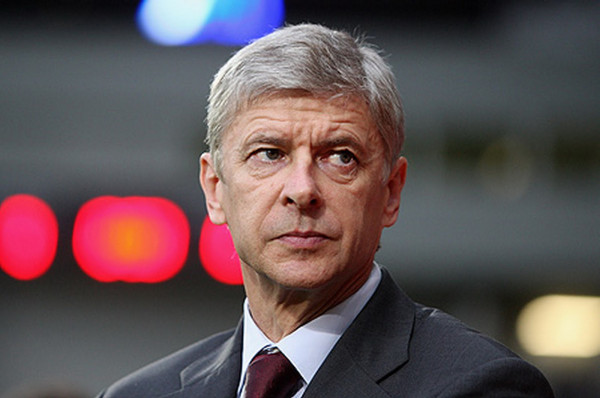 ~~ I bought some vitamins from the same company, and the bottles look the same from the sides and back of the labels. So I arranged them in my cabinet by the amount of pills I need to take of each — 2, 1, 1. I took them this week without a thought, but today I said the numbers out loud. The next thing I know, I’m singing,

Do you think I’ve crossed the line into certifiably insane?

Yeah, he caught my eye
Yes, oh my, oh my
And when he walked me home
Da two-one-one, da two-one-one.