~~ There were two viewer polls on the Today Show in the past week or so that together left me quite bewildered.  The first one was about whether it was acceptable for people to take off their socks and shoes on an airplane (no) and the second was whether it was OK for a host to ask you to take your shoes off at their front door (yes). I guess the people who voted no and then yes are the same as the New Jersey voters who elected Corey Booker as senator, then re-elected Chris Christie as governor.

~~Look, I am all for not smelling other peoples’ feet for hours in closed quarters, but why do you want to subject your guests to embarrassment after they’ve carefully chosen their footwear or worn a pair of comfy-but-shabby socks that were never meant to be the life of the party?

Yes, I know people track in dirt, but unless your invite says “Shoes will be shed at the door” so that all can prepare accordingly, I might be seated at the dinner table next to a person whose aromatic feet would have been better off remaining encased in his shoes… just like on an airplane!

~~ Are you freaking kidding me? According to the Huffington Post, “Public Policy Polling found that the Americans polled were more offended by the rainbow flag than the confederate flag.” Well then... avert your eyes! 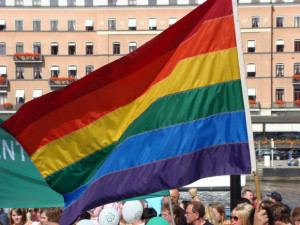 ~~ I went shopping for an evening gown recently.   It’s amazing how many ways a tag and a mirror can shatter your sense of self.